A Guide to Domestic Flights in the UK

Should you be flying around the UK? 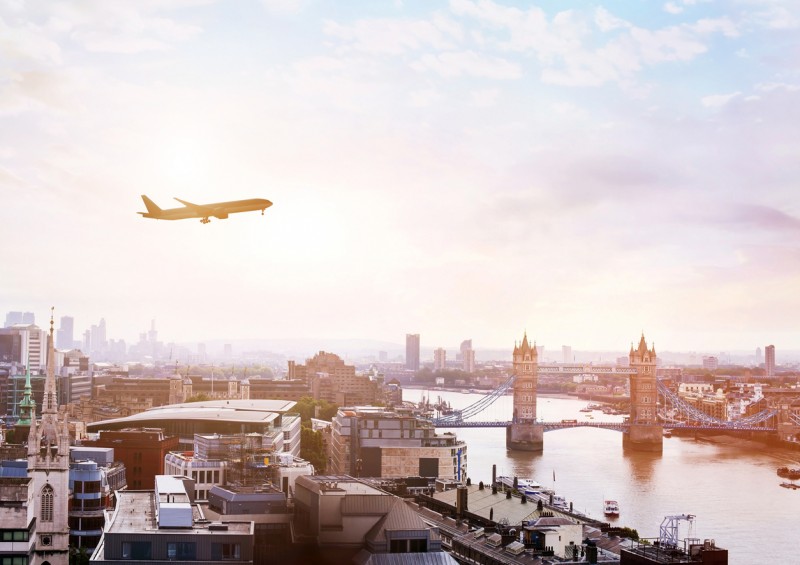 Flying around the UK

The cost of domestic flights

Is it quicker to travel by plane?

Is travelling the UK by plane worth it?

Domestic flights – we’ve all heard of them, right? Watch a quick variety of TV programmes or films set in America and sooner or later someone is jumping on a plane to go from New York to Detroit, Chicago to Seattle or Luton to Edinburgh... okay, maybe not that last one.

Here in the UK, everyone piles into the Volvo, checks their tyre pressure and heads off into the rain (or glorious sunshine because, let’s be fair, weather is changeable) to trundle for six hours around monotonous road works, stopping a couple of times in a Moto services to pick up some boiled sweets and a Costa.

When was the last time you heard of a friend suggesting that you pop to Scotland from Bristol on a plane?

But you know what? It takes little over an hour and costs less than the petrol.

It’s also cheaper than a train ticket on a train that takes more than four hours longer.

Yeah – domestic flights in the UK, who’d have thought it?!

Flying around the UK

A while ago, we wrote an article on how to save on travel costs in the UK and mentioned that planes aren’t the cheapest or simplest option in the UK when it comes to getting from one place to another.

And we were challenged! Some people suggested that, actually, internal flights in the UK are as viable as they are in many other countries and so it bore a little research.

We found that, in the right circumstances, cheap flights across the UK are possible and travelling in the UK by air is not only viable – it’s a great option.

But what are the right circumstances?

The cost of domestic flights

If you are travelling alone, catching a flight is a great option and is a superb replacement for a train in many circumstances.

Add a few kids to the mix though, and it becomes a different story.

The truth is, travelling around the UK by plane is excellent if you only have yourself to pay for (or you’re a couple), but it’s going to be out of reach for a family on a budget. The simple fact that you can pile the kids in the back of the car and it doesn’t really cost you any more in terms of travel expenses means that driving is always going to be the best option for families of 3 or more.

Sure, you are looking at many more hours of ‘are we nearly there yet?’, but that’s what iPads were invented for!

With the early conclusion clearly drawn that children + plane = expensive, let’s look at it from the perspective of a single person, or a couple with independent funds.

Planes can be comparable in price to trains, though it depends on your destination and route. With many airports being situation outside of the cities, you might find yourself adding a substantial cost to your trip through a taxi (or, ironically, a train) once you reach the other side. Unfortunately, where airports are concerned, the journey doesn’t end once you touch tarmac.

The same can be true with trains though, in fact you can flip the argument over and find places (like the Scottish Hebrides) where a train has no reach and a plane is far more convenient. Central London, though? The train drops you in the midst of the tube map and all of Heathrow, Gatwick, Stansted and Luton are actually outside the M25. That’s not close enough.

The bottom line is that it’s situational – there are definitely trips where planes win hands down.

Is travel in the UK actually sped up through use of a plane?

Thanks to mobile phone apps and generally automated systems, the answer is thankfully ‘yes’. But only just.

Again, the distance between airport and city centre plays a large role here. Birmingham Airport is impressively well served by train, for example, with a short 20 minute hop to the centre of the city, and with a check in time for some flights as short as 30 minutes, it’s possible to make it from the Bullring shopping centre (Birmingham) to Edinburgh castle in two hours and 45 minutes. Not too shabby!

Compare that with the train (4:44) and car (just over 5 hours assuming no breaks) and that’s at least two hours more to enjoy and, more importantly, two hours less spent travelling!

Everyone knows that getting a plane that advertises itself as 1hr and 15mins doesn’t really mean that. Time is wasted all over the place at airports, from passing security checks, boarding and finding your way around a shop-filled metropolis looking for gate number 63.

Most large UK airports recommend that you arrive around 2 hours prior to your flight in order to give yourself plenty of time to drop off your bags and go through security, but in reality, anybody who has flown before will know that it doesn’t take that long – besides, if you’re travelling domestically, you might not have any bags to check in!

Smaller airports with fewer passengers often have a quicker check-in and security process, meaning you can get away with turning up a little later. If flying from London City Airport, for example, check in closes as late as just 20 minutes before a flight. We don’t recommend that you leave it that late, but it certainly gives you a little more freedom.

Comfort – is travelling around the UK by plain worth it?

When it comes to comfort, the plane wins hands down. There are people who would argue that a train is very restful, and compared to driving a car it is, but sitting back and reading a book for an hour is a relaxing break, whereas having to encamp for four hours or more starts to stretch from relaxing to just tiresome.

Talking of feeling tired though, if it’s sleep that you’re after, the train does offer more time to get forty winks.

Both planes and trains offer shopping areas before you board, food services and on-board facilities. Planes, however, will never be overcrowded and there’s never a moment when you are sat on your suitcase outside the toilet having to squidge against the wall every five minutes to let someone through.

The rules of UK internal flights

Rules? Yes, where you can simply hop onto a train, there’re some rules for using air travel.

Like it or not, you are going through airport security, even if your flight is domestic. That means whipping off the belt, putting your toothpaste into a see-through plastic bag and popping the laptop into a plastic tray.

But can you fly without a passport in the UK? You can. Photographic ID is acceptable for domestic flights, so a driving licence will do, but if you have a passport you would probably be best served bringing it anyway. There’s always the chance that you discover a cheap last-minute adventure and the frustration of standing in the airport having to watch the opportunity fly off without you would be too much to bear!

Of course, if you are travelling to Northern Ireland then your passport will allow you a quick trip to Dublin.

One other rule involves children: most low cost airlines operating domestic flights will deny children travelling alone under 16 – a situation not replicated on a train where you can send your younger teens off to meet relatives alone. Coaches, however, follow similar rules to the plane operators.

What is the cheapest way to book flights? – Comparing ticket price and convenience

Modern smartphone technology makes organising any sort of trip a breeze and it’s hard to pick a winner. Skyscanner UK has a domestic flight booking system that will find the cheapest flights and can turn around a booking in under five minutes, from ‘Oh, I think I’d like to go there’ to ‘I have tickets’ in 300 seconds or less!

But the trainline app and national rail enquiries websites are comparable in efficiency, so there’s no real winner here.

By comparison, buying a car can take hours, even with the best systems, and even hiring one takes checks and paperwork that pushes the time up to half an hour (mostly spent on site when you go to pick one up), so there’s a clear loser, if not a clear winner!

Can I book a flight at the airport?

Last minute domestic flights are a little touch and go, but yes, you can. You will want to be at the airport a couple of hours in front of your flight though to make sure it all goes smoothly.

Booking in the final hour isn’t the cheapest way to go, though. A report from cheapair.com suggests that the optimum time to book a flight to secure the cheapest price was exactly 54 days before departure. It’s based on crunching numbers from data compiled in 2013, so may be slightly out of date now, but might still be worth exploring.

Flying across Britain for business

One time when flying really seems to be the perfect is for business use. A quick plane hop is that much more efficient and enables you to get there and back again in a single working day. If you need to have a meeting with someone in London and you’re coming from Glasgow, then the time, effort and cost saved by using a plane is considerable (even with the subsequent train from Luton Airport to Central London).

Besides, you can use the few hours you have (both in the airport and the sky) to crack on with some work – something which you can’t do when behind the wheel of a car.

Plus, it’s an expense that can be offset against tax.

Traveling around the UK isn’t as simple as picking one mode of transportation over another and it’s usually a matter of finding what works for you at that time, but planes provide a viable alternative to the other options on offer. Really, the greatest problem is getting to and from the airports – if that was solved then planes would head up the options almost every time.

It’s just a shame there’s no large scale family discount options. People with two or more children are going to find themselves reliant on cars (if they have one) or coaches (if they don’t) almost every time, swapping hours of time for savings on tickets.

Who knows what’s coming in the future. Flying cars are surely just around the corner!

Whether you need to know about travel insurance, saving on your commute or the best way to get a new car, we have the answers at Compare UK Quotes. Dig through our extensive library of in-depth articles to find out more!