Avoid being fined or invalidating your car insurance 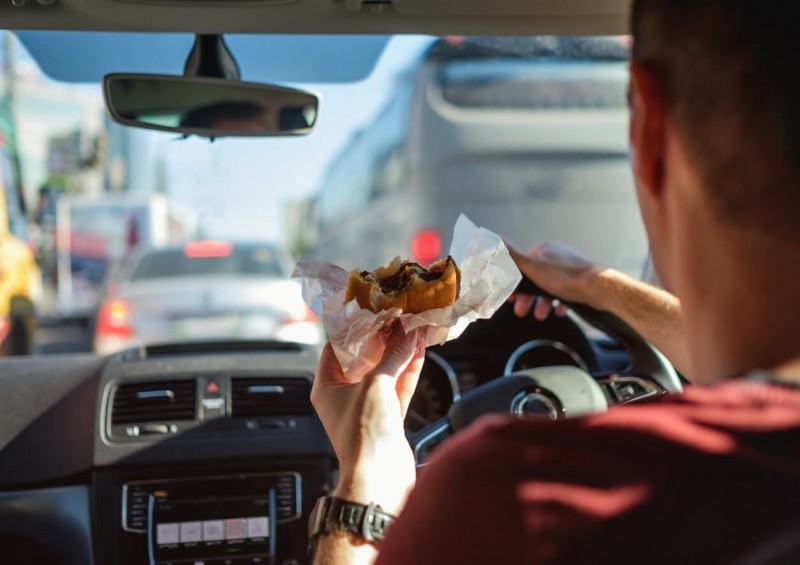 When you think of a driving offence, it’s likely that things such as getting a speeding ticket, drink driving or texting at the wheel will come to mind, but there are many other things that could land you in trouble while driving.

A recent report found that around 88% of UK drivers were guilty of some of these lesser-known driving offences – if they are caught, they risk facing fines of over £100 and points on their licence. On top of this, their car insurance premiums will skyrocket until the driver can build up a no claims discount again by driving sensibly.

Here are four common driving offences that you may not be aware of:

Whether it’s a quick snack on the way to work or a full McDonald’s meal during a long journey, eating at the wheel can be considered a driving offence if you end up being distracted because of it.

39% of UK drivers admitted to doing so, but if you’re caught, you could end up facing three points on your licence, as well as an extra £100 fine.

Remember, car insurance with penalty points is very likely to be more expensive as you pose a higher risk to the insurer, so those who keep a clean record will be offered cheaper premiums.

Men were more likely to commit this offence than women, and it seemed to be particularly common among young drivers, with over half of drivers under 25 years old admitting to eating while driving.

Read more: How Much Do Penalty Points Affect Your Car Insurance?

2. Drinking at the wheel (not just alcohol)

While drink driving is one of the most commonly discussed offences in the UK, many people seem to forget that it is actually considered an offence to drink anything while at the wheel - provided you cause an accident due to being distracted, for example.

As with eating, drinking while driving could lead to three points and a fine of £100, and 36% of UK motorists admitted to doing so.

Note: Drinking water or coffee while driving is not illegal, and neither is eating at the wheel, but it can be classed as careless driving if you’re accused of being distracted because of it.

3. Smoking at the wheel

Smoking while driving is not illegal in itself, but it can lead to careless driving charges if you’re distracted as a result of doing so, similarly to eating or drinking at the wheel.

Recent law changes also mean that it is actually illegal to smoke in the car if you’re travelling with any passengers under the age of 18, however.

4. Swearing and gesturing at other motorists

Swearing or gesturing at other drivers can actually land you in some serious trouble on UK roads, as it is considered a form of ‘disorderly behaviour’.

It carries a huge fine of £1,000 and three penalty points as well, so the 26% of drivers who admitted that they did so should be careful.

The worst-offending age group was those between 45 and 54-years-old, while men were 8% more likely than women to do so.

The consequences of committing driving offences

Committing these driving offences could land you with up to a thousand pounds in fines and several points on your licence.

They may also be reported officially on your record and insurance companies may then see you as a higher-risk driver, which can lead to more expensive premiums, which everyone could do without.

For more information on car insurance and motoring advice, be sure to check out our related guides: