The cheapest ways to get your child on the road 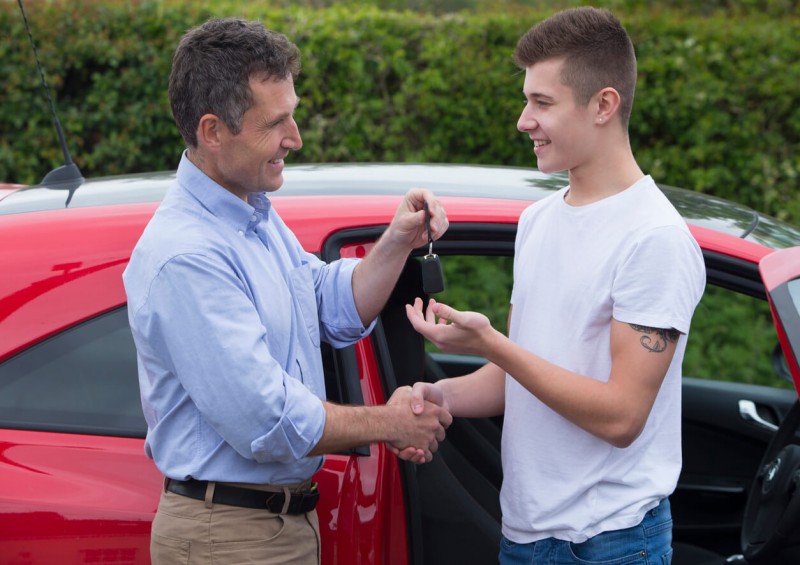 If you’re the parent of a new driver, you’ll know how expensive car insurance can be for them.

Young and inexperienced drivers are faced with some of the highest car insurance premiums of all age groups, so it’s natural to look for ways of reducing the costs.

Adding your child to your own car insurance policy as a named driver is one of the most efficient ways of helping them get cheaper cover, but the savings don’t come without some consequences.

Here, we explain how you can add a child to your car insurance policy, the benefits of doing so, and the possible implications in terms of your own premiums.

Can you add your child to your car insurance policy?

First of all we should clarify that, yes, it is absolutely possible to add your child to your car insurance policy as what's known as a named driver.

As a named driver, your child will be able to drive the car and benefit from the same level of protection as you – the main driver – but the main driver must always be the one who covers the most miles in the vehicle.

Getting car insurance on a parent’s car is a great way to save costs on a new driver policy, as long as they have a driving licence (provisional or full) and the car is not owned, or predominantly driven, by the child.

For example, if your child has recently bought their own car, been gifted a vehicle that you used to drive or even have predominant use of your vehicle, they have to be the main driver on the car’s insurance. Failure to comply with this process is known as ‘car insurance fronting’ and is a serious criminal offence, filed under the category of fraud, which could lead to dire consequences.

If you are found guilty of car insurance fronting, not only will the insurance policy be invalid in the event of an accident meaning any costs involved will come straight out of your pocket, but the driver could be harshly prosecuted with a fine of up to £5,000 and 6 points on their licence – for drivers who have held their licence for less than 2 years, that’s enough for an instant driving ban.

The ramifications don’t stop there, though, as being placed on the Insurance Fraud Register (IFR) can make it extremely difficult to find future insurance policies, and it could damage future credit applications for loans and mortgages.

You can find out more about car insurance fronting and how to make sure that you’re not breaking the law here: Car Insurance Fronting: Are You Breaking the Law?

In order to add your child to your car insurance policy, you will need to contact your insurer and provide them with relevant information, including your child’s:

When you add your child to the policy, you will be able to decide whether they will be a named driver for the rest of the policy’s term or on a short-term basis (usually up to 90 days).

If your child is a learner driver and wants to practice in your vehicle, it might be worth adding them as a temporary named driver.

The cost of adding someone to your car insurance

So, how much does it cost to add a driver to car insurance? The cost of adding a driver to your car insurance policy can vary depending on the individual being added, but most parents will see an increase in their premiums if an inexperienced driver is added to their policy.

The reason for this is that young drivers are statistically more likely to make a claim given their lack of experience, which leads to them being more expensive to insure.

It’s also worth noting that, when adding somebody to your car insurance policy, you are likely to be charged an admin fee to make the amendment (usually between £30 and £50, depending on the provider).

Rather than putting your child on your policy, another popular option is to take out a temporary car insurance policy – in doing so, they will receive comprehensive car insurance when behind the wheel of your car and, if they need to make a claim, your no-claims bonus and insurance policy will not be affected. This is an ideal option if your child is in the process of looking for their own car as you can take out a policy for as little as 2 hours.

When naming a young driver on your car insurance, it is also important to remember that most insurance providers will not allow them to build up their own no-claims bonus until they have a policy in their name, meaning that their insurance premiums will remain high for the foreseeable future.

Some insurers, like Admiral, will allow named drivers to build up a no-claims bonus as long as they remain a customer with them when they take out their first full policy.

Adding yourself as a named driver on your child’s policy

When your child decides to take out an individual car insurance policy, there are a number of things you can do to help them get cheaper premiums – one of them is adding yourself as a named driver on their insurance.

By adding an older, more experienced driver (who has no recent driving-related offences to their name) to a car insurance policy, the insurer can assume that the driving responsibility will be at least partially shared, meaning that the younger, higher risk driver would spend less time at the wheel.

There are no actual requirements which state how the driving must be shared among drivers, but the gesture alone is enough to save young drivers potentially hundreds of pounds – so not only will your child’s car insurance premium be lower, but you’ll have comprehensive cover to drive their car if you need to.

Be sure to check out our full guide to how named driver insurance works if you’re interested in being added to your child’s policy.

How to get cheaper car insurance for new drivers

As well as adding a more experienced driver to a policy, there are many ways to get cheaper car insurance in the UK. These include:

Where to buy car insurance for new drivers

If you’re looking to add your son or daughter to your existing car insurance policy, you’ll have to contact your insurance provider directly to get a quote.

However, if you want to take out a new policy with your child added as a named driver, you can get a free car insurance quote with us here at Compare UK Quotes:

The same also goes for your child if they want to take out their own car insurance – they should start by comparing quotes from a range of providers in order to ensure that they get the best deal possible.

I’m Learning To Drive: Do I Need Car Insurance?